Half a block away from the City of Boston’s 1010 Mass Ave location and Boston’s Public Health Commission sits Clifford Park.

Clifford Park is a wonderful expanse of land. On it sits 2 tot lots, 2 baseball diamonds, a tennis court, basketball court and practice football field. This field is used by many area residents and is also the home practice field for Roxbury’s own pop warner football team the Bengals.

For too long however, this park has been left unnattended by the city and as it now sits in what is known as the “methadone mile” has become a dangerous haven for open drug and alcohol abuse.

Coaches, parents, residents and most important the children, have seen too much of this for too long.

Today on October 12, 2016, over two dozen residents placed calls/issues with the city’s neighborhood services through 617-635-4500 / 311 / or the app BOS311. The reception of these calls ranged from “good” to “they seemed annoyed” to “rude”. Case numbers were assigned many prior to 1:30p. By 4:30p, some of these cases were being closed out due to “no findings”. This is very concerning because other residents and I visited Clifford Park today after 2:00p and found all of the things listed in complaints within 10 minutes of just walking through the park at different times. For a video of the walk, click here and here.

To me this says,

I have sent a letter to the the Office of Neighborhood services requesting an immediate and sustained plan of resolution that includes a full cleaning of the park, regular maintenance and increased policing.

Im interested in how long it takes them to respond and how efficient the response will be.

I thank the dozens of concerned residents who took swift action when made aware of the issue. You’re sustained engagement will make a difference in our community. 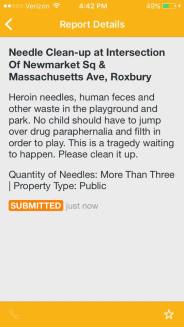 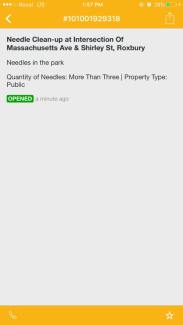 One thought on “Heroin in Roxbury’s Clifford Park”